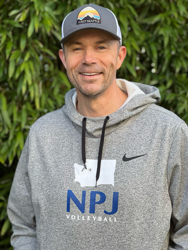 Scott has coached indoor and beach volleyball athletes at the juniors and adult levels.  He is the current coach of the NPJ Seattle Boys 14 National team.

Scott is deeply involved in the development of the sport in the Seattle area.  He founded the first beach volleyball players association at Alki Beach in West Seattle, ran adult Open tournaments and installed additional beach courts to provide more opportunities for access to the sport.  These steps led the way to the current beach volleyball tournaments and trainings occurring at Alki Beach each year.

Scott’s still plays and makes a point to compete in the annual Seaside Beach Volleyball tournament in Seaside, Oregon each year.  Last year he pulled double duty and won both the masters division with his former partner and the parent/child silver division with his 10-year-old son.